This month I read more nonfiction than fiction. I read four marketing related books that were all short, a really suspenseful fiction story,

and a couple of novels. 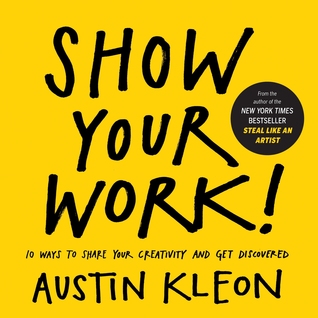 I read a short quirky book, Show Your Work by Austin Kleon. In this book, he shares about artists, writers, and other creatives sharing their work in many forms from social media to expos and everything in between. In this day and age, it is necessary for the artist to get their work out there to be seen and enjoyed.

Another short book was Six Figure Author by Chris Fox. This book was mostly about how to find your best tribe on Amazon and get connected with the right readers by doing some tedious research. I still have yet to do this research, but I’ve added it to my mental to do list.

An intriguing book to me, was Marketing for Writers Who Hate Marketing by James Scott Bell. I’ve already mentioned this book, here. There was some good content and some things to think about. I love his books, both fiction and non.

Another fiction title I read was Richard Paul Evan’s The Broken Road. This book was not nearly as good as his Christmas stories, but was still well written. The first of a trilogy, we read about a man who sells dreams at expensive wealth building seminars, but now it is becoming a nightmare and he feels guilty.

I read a World War II book, The Alice Network by Kate Quinn, a time slip novel that takes place both in 1915 and in 1947. Eve is hired as a spy to work in a French restaurant and eavesdrop on the Germans who come in to eat expensive meals and drink wine all they wish. Charlie in 1947 is determined to find her lost cousin and finds Eve to help her.

And I managed to read another Miss Silver mystery, She Came Back by Patricia Wentworth. In this one, a gal who was caught in France right at the beginning of WWII was thought dead, but after two years showed up again. Her husband has a hard time accepting her and can’t feel like he can love her. But she asks for a six month trial which he agrees to. But is she who she says is, or a really good impersonator? This has been one of my favorites in this series so far.

And the last book I read for August was Steal Like an Artist by Austin Kleon. I liked this book too and it had some good ideas, even for writers.

If you click on the title links, you should go to the Goodreads page for that book.

I’m in the beginning marketing phase of Heir Force, writing up the back cover copy, the sales sheet, etc. I’m looking forward to the final cover, and I’ll let you know what it looks like soon!